Connect with us
Did You Know?
Movie star Burt Reynolds was always behind the wheel of this iconic car, a 1977 Pontiac Trans AM for the popular movie Smokey and the Bandit. The hugely popular film was actually the second highest grossing film of that year, with first place going to Star Wars.
Gran Turismo 3: A-Spec is a racing game that was introduced in 2001. It is the first of the Gran Turismo racing series.
Action adventure video game Super Metroid was released in 1994 and is the third installment of the Metroid series.
The official date of the start of WW2 is September 1, 1939.  Even though many world conflicts began earlier than this date.  Click CONTINUE QUIZ below to continue. 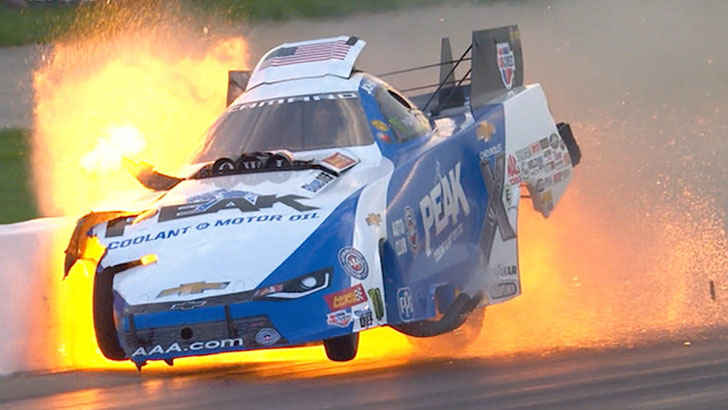 The words from John Force after another engine explosion and crash into the wall: ” I will never give up on it until it kills me.” During this past weekend JEGS Route 66 NHRA Nationals the 16-Time NHRA Champion John Force had a major incident after leaving the start line where the champ hit the right retaining wall. After getting the car to a stop Force was able to pop the exit door atop his funny car and pull himself out of the car while the NHRA safety safari was able to attend to the wrecked nitro funny car. the 2018 season has been a whirl wind for many of the funny car teams with engine power increases has resulted in many engine explosions that also catapulted the carbon body work into the air roughly 100 feet.

Force experienced three explosions within the first three races of the 2018 season.

“I am sore but I won’t let this race car beat me up. I have Peak and Old World Industries out here. We are going to pull out the back-up car and get to work. I love all the fans out here and I have to thank them for all their support.” Force tells Racer.