Did You Know?
This 1976 AMC Pacer is the iconic ride used in the film Wayne’s World. This 1992 cult classic featured the two main characters Wayne and Garth cruising around in this baby blue ride featuring bright flames on the side. It was also the location of the iconic scene where the movie’s main characters sing their rendition of “Bohemian Rhapsody.” Party time…Excellent!!!
One of the most notable vehicles from the television series was the black 1972 Ferrari Daytona Spyder 365 GTS/4 from the early episodes of Miami Vice. The vehicle was driven by James “Sonny” Crockett before he switched to the Ferrari Testarossa in the third season.
This City Chevy Lumina was made popular in 1990 when it was featured in the film Days of Thunder, driven by none other than actor Tom Cruise. If you’re a racing enthusiast, this film also features real NASCAR drivers such as Rusty Wallace, Neil Bonnett, and Harry Gant.
Another Tom Cruise flick, Risky Business, featured a 1981 Porsche 928. It’s said that this vehicle was chosen for the part because it was “exotic, but not unobtainable.” 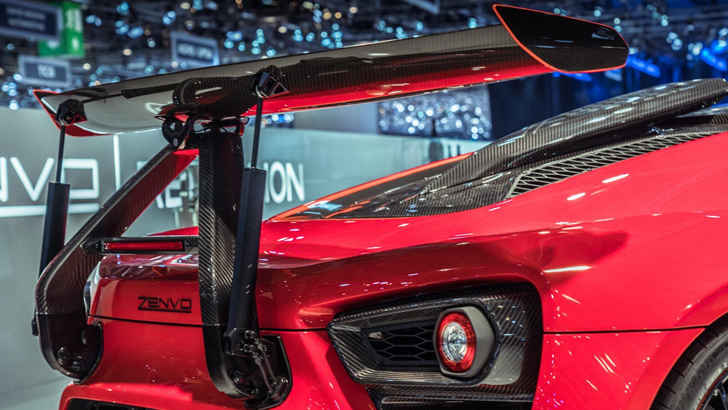 We saw the crazy twin-axis active aero wing on the Zenvo TSR-S for the time at the Geneva Motor Show back in March. For the first time we see the 1200HP Zenvo on track with the active aero working to obtain maximum grip for the exotic hyper car.

The Zenvo TSR-S makes roughly 1200HP at 8500rpm with a 5.8-liter supercharged V8. The 0-62mph number clocks in at 2.8 seconds and max speed is computer limited to 202mph. The insane wing that is attached to the Zenvo in the rear is called the Centripetal Wing, it has two axes which means that the wing can function for downforce while accelerating through a turn and also used as an air brake like the McLaren 720S. When the Zenvo is cutting through a turn the philosophy of the wing is to tilt and angel itself for maximum grip.