Did You Know?
The Lamborghini Muira was launched at the Geneva Motor Show in 1966 and it shocked the world.  Named after the a Spanish fighting bull.  The Muira was designed and built by a young design team at Lamborghini at the time.
The Mercedes AMG GT R is the high-performance model of the AMG GT.  The GT R started its' production in 2017.  The GT R is equipped with a 4.0-liter v8 with twin-turbochargers.
Movie star Burt Reynolds was always behind the wheel of this iconic car, a 1977 Pontiac Trans AM for the popular movie Smokey and the Bandit. The hugely popular film was actually the second highest grossing film of that year, with first place going to Star Wars.
This uniquely shaped vehicle is none other than The Batmobile. It’s a fictional automobile that is stored inside the “bat cave” in the movie. The Batmobile is driven by Batman himself and uses it to his advantage when engaged in crime-fighting activity.

With the highly anticipated launch of the Ford GT to the lucky hand selected customers. Ford has been putting the final touches on it supercar and most recently the Ford GT’s have been spotted in the high mountains of Colorado. 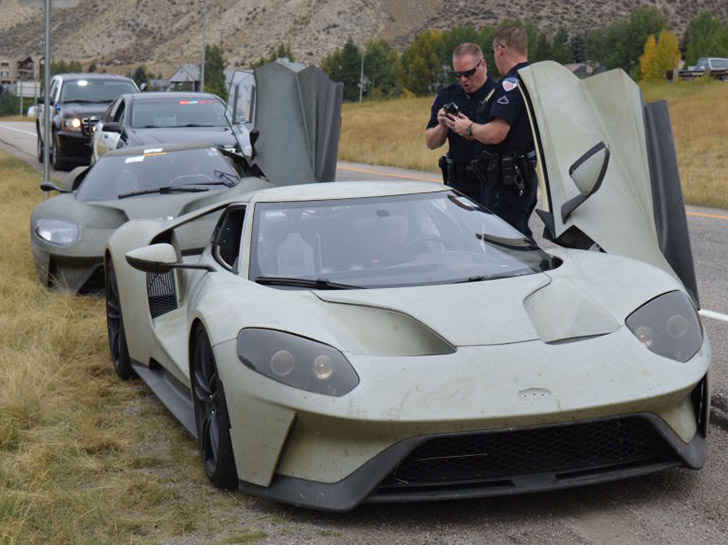 Today the GT’s were observed going almost double the speed limit. In a 50mph-zone the 3 cars were clocked going 101mph and were pulled over by a second officer after the first officer was unable to pull out to start pursuit.

The prototypes were carrying lots of data logging equipment and from reports at least one of the drivers was summoned and will have to reappear in Colorado.

Here is footage of the cars cruising in Colorado.