Did You Know?
The Ferrari F50 was introduced to the world in 1995.  The F50 has a mid-engine 4.7-liter naturally aspirated V12 engine.  The V12 engine was developed during the use in the 1990 Formula 1 season.
You couldn’t miss this van anywhere! This van-converted to a dog is complete with floppy ears and a tongue. It is known as the Mutt Cutts Van from the comedy Dumb and Dumber.
This car was made famous in the 1986 supernatural film called The Wraith. This Dodge M4S was built in 1984 as a demonstrator vehicle, but gained major popularity after the film propelled the car to fame.
Released in 1991, Tecmo Super Bowl was the first game licensed by both the NFL and NFL Players association, thus allowing the game to use the real names of teams and players. 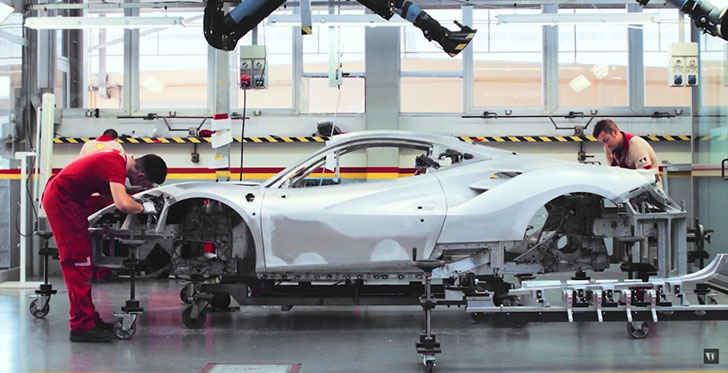 Here is an inside look of the Ferrari factory in Maranello, Italy. The 70th anniversary for the Italian auto maker has come and gone but WIRED takes you inside the luxury brand’s assembly line that creates some of the world’s most high-tech automobiles.

With a voiceover from Vincenzo Regazzoni, Ferrari’s chief manufacturing head honcho. You can bet you are going to get some of the best info from inside the Italian factory.

Ferrari History: Ferrari has been producing Italian sports cars since 1947 but has racing roots all the way back to 1929 when the Scuderia Ferrari racing team was formed by none other than Enzo Ferrari himself. For quite sometime Ferrari has been under the Fiat Chrysler Automobile flagship company but as of January 2016 Ferrari officially split from its former parent company.