Connect with us
Did You Know?
The Apollo Arrow was debuted at the 2016 Geneva Motor Show.  The Arrow produces 1,000 horsepower with a twin-turbo 4.0-Liter V8 engine.  The top speed of this german built monster is 220 mph.
Sonic the Hedgehog was played on the Sega video game console. It was a high-speed video game centering on the main hedgehog character with super sonic speed.
In 1939 Albert Einstein wrote to President Roosevelt to warn him of Germany's nuclear weapons research and how far along they were to creating an atomic bomb.  This made President Roosevelt put Atomic Energy at the high priority.
The Rock and Roll Hall of Fame is located in Cleveland, Ohio. It recognizes some of the biggest and most influential musicians, artists, producers and engineers in rock and roll.

Video shows the moment an out-of-control Tesla driver crashed into the Greater Columbus Convention Center in Columbus, Ohio, on May 4 at about 12:30 p.m.

Authorities say the Tesla Model 3 exited the highway and ran a red light at an estimated 70 mph before jumping a curb, down some steps, and smashing through the glass of the convention center. Though several events were taking place that day, no one was seriously injured or killed.

The convention center estimates the crash caused at least $250,000 in damages.

The driver, 63-year-old Frantz Jules, told police that the vehicle’s brakes failed. Jules has been charged with failure to control. 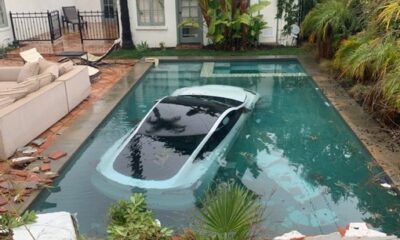