Connect with us
Did You Know?
The boxing video game, Mike Tyson’s Punch Out! Was published in 1987. The goal was to make it to the last round where your character would play boxing legend Mike Tyson.
This action adventure video game is called The Legend of Zelda which centers around the character named Link and his quest to rescue Princess Zelda.
SimCity 2000 is the second installment of the SimCity series. It allows players to build his or her own virtual city.
In 1939 Albert Einstein wrote to President Roosevelt to warn him of Germany's nuclear weapons research and how far along they were to creating an atomic bomb.  This made President Roosevelt put Atomic Energy at the high priority.

NASCAR driver Riley Herbsts No. 98 Xfinity Series hauler was en route to Las Vegas when it crashed near Flagstaff, Ariz., on Wednesday.

A video shared by Twitter user @DiSportsMom shows the trailer tilted off the side of Interstate 40 and surrounded by emergency vehicles.

Per reports neither of the trucks two occupants were seriously injured in the single-vehicle collision.

Herbst, a Las Vegas native, was eliminated from the NASCAR Xfinity Series last weekend at the Charlotte Motor Speedway in North Carolina. After starting the race up front, he crashed multiple times in the final stage. The No. 98 car is fielded by Stewart-Haas Racing. 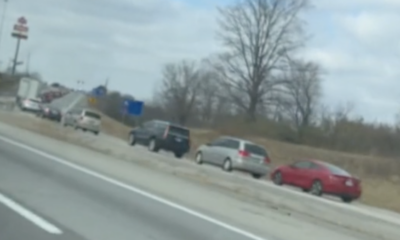